Effective Wednesday, January 5th, 2022 we will be in our new location.

Matthew James Yetmar, of Des Moines, died Friday, October 8th. He was born September 21, 1982 in Denver, Colorado. He attended elementary school in Ames, and Topeka, Kansas.
Matt graduated from Waukee High School in 2001. He attended DMACC and the University of Iowa.

Matt was a 5th year electrical apprentice and a member of the Iowa Brotherhood of Electrical Workers, Local 357. He worked for Baker Electric for the last 5 years. Previously, he was a lineman apprentice with Local 55, and worked for United Rentals in Des Moines and Cedar Rapids.

Matt was an avid Iowa Hawkeyes and Chicago Cubs fan. Matt was a talented artist and writer, and could fix about anything. He loved all dogs, music of all kinds, going to concerts and hanging out with his friends. Matt had the most beautiful eyes and a great infectious laugh.

A Celebration of Life service will be held on Friday, October 15, 2021 from 4-6 pm at Caldwell Parrish Funeral Home in Urbandale. Memorial contributions may be directed to the family. Online condolences may be left at www.caldwellparrish.com 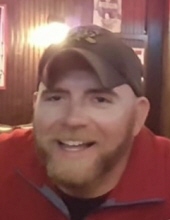